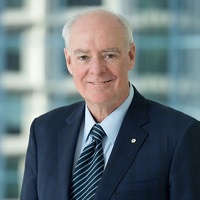 The Honourable Perrin Beatty, PC, OC, is the President and Chief Executive Officer of the 200,000-member Canadian Chamber of Commerce, Canada’s largest and most representative national business association. Before joining the Canadian Chamber in August 2007, Perrin held the same role at Canadian Manufacturers & Exporters (CME).

A descendant of one of Canada’s most prominent manufacturing families, he grew up in Fergus, Ontario and graduated from the University of Western Ontario in 1971.

Perrin was first elected to the House of Commons as a Progressive Conservative in 1972. During his 21 years in Parliament, he served as Minister in seven different portfolios, including Treasury Board, National Revenue, Solicitor General, Defence, National Health and Welfare, Communications and External Affairs.

In 1994, Perrin joined a number of private sector boards and worked as a consultant in communications. In addition, he was an Honorary Visiting Professor in Western University’s Department of Political Science. From 1995 to 1999, he served as President and Chief Executive Officer of the Canadian Broadcasting Corporation.

Perrin is currently a member of the board of directors of Mitsui Canada and in 2018, he was made an Officer of the Order of Canada for his lifetime of public service and for his devotion to the development of our nation as a community leader and corporate visionary. In 2020, the Government of Japan awarded Perrin the Order of the Rising Sun, Gold and Silver Star, in recognition of his many distinguished achievements in international relations and advancements in Canada-Japan business relations.