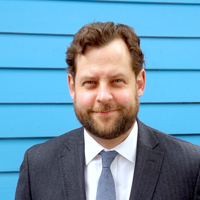 Chris Turner is one of Canada’s leading voices on climate change solutions and the global energy transition. He draws on his reporting of the state of the art in renewable change, cleantech, and urban design to paint a vivid portrait of a new, sustainable world order that will allow individuals and businesses alike not only to survive but thrive in the twenty-first century economy.

An award-winning author, Turner has published several bestselling books. The Patch: The People, Pipelines, and Politics of the Oil Sands won the National Business Book Award, and his previous books on climate solutions, The Leap and The Geography of Hope, were both National Business Book Award finalists. His latest book, How to Be a Climate Optimist: Blueprints for a Better World, was published by Random House Canada in 2022. Turner also published a collection of his award-winning essays and feature writing in 2014, How to Breathe Underwater, which won the City of Calgary W.O. Mitchell Book Prize.

In addition, Turner’s writing on energy, climate, and technology have appeared in The New Yorker, The Guardian, the Globe and Mail, Maclean’s, and many other notable publications. He has won 10 National Magazine Awards, among other distinctions. Turner was a 2019 media fellow at the Berlin Energy Transition Dialogue; a 2013 writer-in-residence at the Berton House in Dawson City, Yukon; and a 2010 Paul D. Fleck Fellow at the Banff Centre.