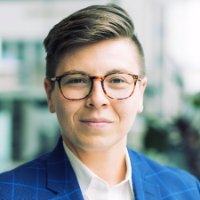 I had a rough childhood. I was raised by a single mother who brought me to Canada when she was 24 and I was one-and-a-half. Growing up, I battled with mental health issues, culminating in an attempted suicide. In the back of my head, I felt different. I wasn’t like other kids.

I tried to run away from my feelings to university, but they followed me. I was angry, and I failed my courses and had to drop out.

Things only changed when I found a community of peers that had experienced the same hardships. Becoming involved in the LGBT+ community in Ottawa, I started to feel better about myself. That’s when I knew I couldn’t run away from being gay.

I took another stab at school, and in that first year back I stumbled upon a professional opportunity that would change my life, a student position at Export Development Canada (EDC).

I came out to the small team I worked with during my first year as a student employee and for the first time experienced the importance of being “out.” Immediately, I felt like I was being taken into a second family; my team gave me the confidence to be myself. My leaders took chances on me, which fuelled me to keep pushing my boundaries, to think outside the box, and grow into new roles. It was a catalyst for my professional success.

A few years later, EDC was making a concerted effort to promote its commitment to inclusion in the workplace by creating a Diversity & Inclusion Committee. At the time, the groups represented were women, visible minorities, Indigenous persons and persons with disabilities.

There was one thing missing, from my perspective: LGBT+ representation. A group of “out” employees and allies recognized the gap immediately. We had all experienced in one form or another the pressure to conform, to hide, or to lie about our lives outside of work. We thought, if we as “out” individuals in the workplace felt this way, there could be others that were struggling as well. EDC’s LGBT+ Resource Group was born.

Then, in 2016, I volunteered for a four-month CARE Canada duty in Morocco, a country where homosexuality was (and remains) criminalized. I had to censor myself, change my mannerisms, and lie. The emotional and psychological energy I spent worrying about what I might say took away from the work. But, more importantly, as a human I felt secluded and scared that I wouldn’t be accepted—or worse, that I would be persecuted—for who I was. I was able to get the job done, but I knew that I was not able to give my all to the experience because of the emotional strain of having to hide myself.

In the run-up to my homecoming, I decided to become even more vocal. I wrote an internal blog about my experience in Morocco and later stood up before hundreds of colleagues at our annual employee conference and told them my story start to finish. The response was overwhelming. Colleagues shared their own stories: heart-warming, inspiring and at times sobering. The topics were varied and complex, but each spoke to issues I knew intimately: identity, acceptance and support.

I discovered there is a need to keep having these discussions on the biggest platforms we can find. Workplaces of all sizes must demonstrate their commitment to diversity and inclusion and provide the space for communities of minority individuals to get together, discuss the issues, find the gaps, and support each other. It’s integral to the success of individual employees, as well as the workplace and broader LGBT+ community.

I often hear about the importance of separating work and home, but for me bringing my whole self to work allowed me to find my confidence, my openness, and my vulnerability. Without that, I know that I couldn’t have pushed my skills to the next level, I couldn’t have pushed myself to grow and learn with the same gusto. And ultimately, I would have been selling myself and my workplace short.

This article was originally published in the Ottawa Citizen.