Canadian companies are oft described as risk averse or conservative when it comes to doing business internationally, but as Facebook founder Mark Zuckerberg explains: “The biggest risk is not taking any risk.”

Risk is inevitable. But planning and preparing for it can make your company more agile, innovative and successful.

So how do I manage risk anyways?

There’s no ‘one-size-fits-all’ solution as there are various factors that need to be taken into consideration to determine your level of business risk, including your:

Nevertheless, developing a strong risk-management plan can ensure you’re prepared to deal with risks as they emerge. A successful plan includes systems and processes tailored to mitigate as well as manage risks in various areas of your business.

There are 5 specific risk areas you need to analyze to develop a sound risk mitigation plan.

This is the overall risk in the country you are targeting where an unforeseen situation could prevent you from getting paid or executing the deliverables of a contract. Worst-case scenarios include loss of assets or having your people stranded in a country.

One example is the ongoing political instability in Madagascar since a 2009 coup overthrew the sitting government. This led to a mass exit of foreign investors who could not operate their businesses because of the political volatility.

Country risk can be broken down into 5 sub categories.

Changes in government regimes or even changes in policy can negatively impact how you do business in a region. The ongoing renegotiation of NAFTA and increasing protectionism in the U.S. is an example of political risk.

Getting paid for products or services that you sell in an international market is the goal. But there are many factors to consider including the foreign exchange rate against the Canadian dollar, payment terms and whether the economy is stable overall. For Canadian exporters doing business in the U.S., a swing in the value of the Loonie against the U.S. dollar can impact overall profits.

This type of risk refers to socio-economic factors that can impact your business such as culture and corruption. In Hungary, for example, culture is a major issue, specifically language. The manner of speaking tends to be formal in a business context and you must be prepared for that. Where Canadians may come across as a little informal, Hungarians tend to be very correct.

There will be contracts governed by the laws and policies of the specific country where you are doing business. It’s crucial to understand the laws that regulate your industry, potential legislative changes and how that might impact your business.

Companies can’t control mother nature but if you’re targeting a market prone to natural occurrences like hurricanes, earthquakes and flooding, a climate-event can disrupt your supply chain.

For companies doing business internationally, political change in international markets can affect your profits as well as your business.

A recent example is the recent trade protectionist sentiment that has been growing globally.

These have a greater impact on smaller or medium-sized companies because they are specific to a company’s operations in a specific market. An example is the U.S. Government’s decision to add tariffs to aluminum and steel imports in the midst of NAFTA renegotiations.

There are 6 major types of political risks:

a) Legal and regulatory changes

Governments can change the rules of engagement at their discretion, negatively impacting your operations.

b) Restrictions on imports/exports

Known as import/export controls, countries use these to benefit the domestic economy. For example, Canada has import controls on agricultural products and textiles.

c) Restrictions on moving money back to Canada

Violent swings in foreign exchange (FX) rates and government restrictions on currency transfers are known as transfer and conversion risks. Fluctuations in currency can prevent a customer from paying or result in money being frozen in-country for an unknown period of time.

d) Breach of contract by a government

Dealing with international governments can pose risks, including:

In some circumstances, governments can seize your company’s assets which could mean paralyzed operations and an inability to get your assets out of the country.

In some countries, civil unrest including war, revolution or terrorism can halt operations, as well as impact staff and any assets in that country.

Companies expand to international markets in an effort to generate new revenue. However, going global exposes your company to new financial risks such as currency fluctuations, longer payment terms and unfamiliar payment instruments and systems.

These are the common types of financial risk:

A strong contract is crucial to international success. If something goes awry with delivery or payment, a solid contract can be a lifesaver.

Getting paid depends on how well you know your international customer. For example: are they financially stable?   What is their payment history with other suppliers? Will payment terms enable you to meet your financial obligations?

This is a major risk when doing business internationally. The Canadian dollar is not worth as much as the U.S. dollar, for example, and it fluctuates daily. Volatile swings in the exchange rate can translate into the difference between profit and loss.

Many international customers won’t do business with you unless you post a performance bond—a guarantee from your bank that you will fulfill your contract commitments.

The bond usually takes the form of a standby letter of credit which many banks require 100% security for each dollar issued. The risk here is that this requirement, in some cases, can make it financially impossible to do business without other sources of security.

The U.S.-based Institute of Risk Management defines cyber risk as: “any risk of financial loss, disruption or damage to the reputation of an organization from some sort of failure of its information technology system.”

This is one of the fastest-growing risks facing all companies.

As the world becomes more connected and the Internet of Things (IoT) more prevalent, this risk, as well as the potential consequences, will only increase.

The largest data breach to date, the 2017 cyber-attack on Equifax, comprised the personal data of 247 million people and cost the company $439 million.

Chances are your company is part of a supply chain and the gateway to exporting for many companies. But supply chains also have risks, these types include:

A supply chain is only as strong as its weakest link. That’s why all partners in a supply chain need to conduct due diligence on each other to ensure there are no disruptions.

b) Shipping and delivery

Weather complications, accidents and equipment breakdowns are for the most part out of your control, yet they can wreak havoc on delivery schedules and getting product to market. While you can’t control acts of Mother Nature, you can plan for them by insuring yourself against theft and loss and devising a back-up plan.

Customs and regulatory compliance, particularly the lack thereof, can be a major risk when doing business internationally. Mistakes and inaccuracies not only cause delays, but could result in fines, seizures and even criminal charges.

Doing business internationally can be risky, with many of the risks beyond your control. However, global success requires a risk management plan for the unexpected. Developing a strong a mitigation strategy can protect your company, avoid delays and help you deal with unexpected challenges as they arise.

Watch for the next article on how to build a strong risk management plan.

Plan and then plan some more. Developing a risk management strategy is key to success internationally.

No risk. No reward. Global business is an increasingly risky business 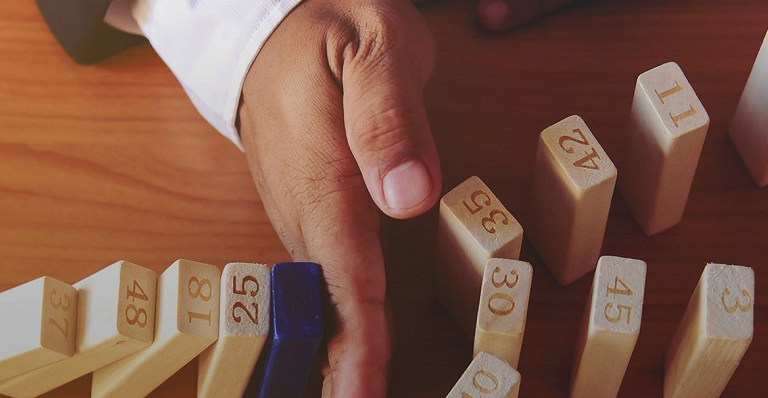 Learn how to mitigate your business risk.