Innovation is a major buzz word these days. But what does it look like in practice? Paul Lem, founder of Ottawa biotech company Spartan Bioscience, offers a look into what his firm did to focus on innovation and gain a global edge.

In this article you’ll discover how to:

To be true innovators, companies have to put innovation at the forefront of their business growth strategy. But what does that look like in practice?

Paul Lem, founder and CEO of Spartan Bioscience, offers some key ways his firm’s focus on integrating innovation positioned him as a world leader in medical diagnostics and beyond.

1. Identify the problem you want to solve

When we talk about innovation from a business perspective, the best approach is to look at it through the customer lens. In some cases, integrating innovation is about improving a product that’s already in market – either your own or someone else’s. In Lem’s case, it was about using existing science to create something entirely new. But he had a clear idea of the problem or challenge he wanted to address.

When the mapping of the human genome was completed in 2003, world-renowned entities like GE, Canon, MIT, Harvard and Stanford began to pile money and resources into being the first to develop technology to harness the diagnostic potential of DNA. Lem, a medical doctor who had worked on the genome project at Stanford, had a solid understanding of what was at stake.

“I just kept thinking, ‘What do doctors and patients really want?’” says Lem. “One day, people would want instant access to DNA tests. I felt I had as good a chance of anyone of making it happen.”

“Fundamentally, everyone wants to know health information—and DNA is at the root of all that,” says Lem. “But we had a lot of competition.”

2. Approach the problem in a unique way

It’s not always easy to compete with big, established companies. But small businesses can create a competitive edge when they focus on innovation to tackle a problem differently from the market leaders.

When it came to DNA diagnostics, most research institutions and firms were zeroed-in on creating a DNA chip, a device developed out of silicon semi-conductor technology. Lem took a different approach.

“A lot of these companies were thinking if we throw enough money and people at this, we can make it happen,” he adds. “But we thought, ‘We’re in Ottawa; there’s no way we can afford a billion-dollar silicon lab.’ Not only that, but the chip would be ridiculously expensive and there wouldn’t be an opportunity to scale it up for years.”

“Spartan’s solution was to focus on the chemistry bring DNA testing away from the lab and to create a personal, portable DNA analyzer.”

By starting out with a clear idea of the problem he wanted to solve and a proposed solution, Lem was able to put the ball in motion to make it happen.

Innovation rarely comes in the form of a big bang. Business innovation demands continual development of hypotheses, tests and experimentation. You have to be prepared to fail many times before even the smallest move forward. Eventually, a viable product may emerge, but it still requires frequent testing and tweaking.

Spartan Bioscience: You can now hold a DNA test in the palm of your hand

When, in 2015, Lem’s small company made one of the biggest breakthroughs the health science world had seen in more than a decade, there was little celebration. The team at Spartan Bioscience designed a handheld device to capture and test DNA instantly. But there was no “aha moment” and little fanfare, says Lem.

His team had been caught up for 10 years in a global race-to-market with more than 200 organizations to create the world’s first instant DNA tester.

Lem knew from the beginning that it would take years to hit the target. He had to sell both investors and employees on that fact. Innovation, as his team approached it, came in the tiniest of increments. Beyond the decision to file for patent protection a few years ago, Lem can’t even pinpoint the exact day or hour the device was “created”.

“We celebrated milestones like creating new applications or the next generation of the device. We’re now on our fourth,” says Lem. “But the kind of research we’re doing doesn’t end in a single ‘wow’ moment. We were heads down for years and we will be for years to come. This incremental approach to innovation requires a lot of commitment and a lot of patience.”

Bringing the power of DNA testing to everyone

4. Focus on the target market

It’s easy to get caught up in research and development for years without considering the end goal, but Lem says it’s critical to keep the customer in mind when creating  a marketable product.

“Innovation was integrated with our business growth strategy from the beginning. We didn’t see the point of spending a decade in research only to come out with a product that wasn’t marketable.”

If there’s no obvious market for your product, consider creating a new one, says Lem.

Although they were competing with large entities, a big part of Spartan’s innovative approach was to create a diagnostic tool that would appeal to people beyond those working in hospitals.

“Disruption means taking existing technology and creating net new users by making it cheaper or more convenient to use.”

5. Determine how innovation will fit with your growth plan

The portability of DNA testing

Instead of chasing his competitors to create a lab-based solution that would only apply to medical professionals, Spartan set forth to create what Lem describes as “the Microsoft® Xbox for DNA.”

“The vision was that we’d build the ‘game console’ and then people would come to us to tell us what sort of games they want on it.”

“By making something portable and finding new net users, we knew the product would be instantly scalable.”

The Spartan Cube is the size of a coffee cup, the “world’s smallest molecular diagnostic device.”

Lem intended his product to have  multiple, broad applications. His company’s continual growth is centred on the idea that the Spartan Cube can be adapted for use by people across a broad range of industries, not just medicine.

Customers are often big pharmaceutical companies, governments or medical institutions. They suggest the “game” they want—a DNA test—and Spartan’s team finds a way to create it.

Among its successful applications, Spartan has an FDA-approved drug metabolism test in the global market. The test is now used by the Mayo Clinic for the largest trial of genetics in cardiology. The test identifies a gene carried by 30% of the world population, which can complicate pharmaceutical treatment following heart surgery. If left undiscovered, the combination of drugs in gene carriers can be fatal to certain patients.

At the behest of a pharmaceutical client, the research and development team spent 18 months last year to create a DNA test for use in clinical trials of Alzheimer’s patients. The test can identify mutations of a gene associated with increased risk of late-onset Alzheimer's disease.

In February, 2018, the Spartan Cube added the capability to test for a deadly bacteria called Legionella, a useful tool for owners of large buildings, like condominiums, office towers and hotels.

“We get calls weekly from organizations around the globe with new uses for this handheld DNA analyzer,” says Lem. “It was always our intention to create a scalable product.”

6. People are at the centre of integrating innovation: Culture matters

Spartan recruited a team with top expertise across industries including medicine, biology, hardware and sales.

Having the right people in place with a common goal is more important than just funneling money into R&D, says Lem.

The founder of Car Canada, Jonathon Donaldson, is Spartan’s head of business development. Most of the executive team were mined from experienced tech talent.

“The huge advantage to being in Ottawa is the hardware talent with the history of telecommunications pioneers like Nortel.  We had the chemistry brains already. We set out to recruit some of the best hardware talent Ottawa had to offer.”

Having a clear vision of what you are trying to achieve from the outset is important, but Lem also encourages his team to do the following along the way:

“My team has a lot of autonomy in how they do their work. We’ve offered them a compelling vision of what we’re working toward and they can directly see that what they’re doing makes a difference. As a result, we have 80 people who are committed to us and to this project.”

Firms looking to prioritize innovation must be prepared to put money behind it. Lem’s pre-entrepreneurial years were spent in meeting after meeting with venture capitalists from across North America. His challenge was to sell them on an idea that, even if he was successful in beating out world competitors to create a DNA analyzer, it could take a decade or more to bring any kind of viable product to market.

Over the years, Lem, along with his brother John, a hedge fund manager, continued to seek investment and other financing streams. In 2010, Lem was awarded $200,000 as the winner of the Ontario Premier’s Catalyst Award for Best Young Innovator.

In late 2013, when Spartan was on the edge of finally creating the first generation of the diagnostic tool, industry giant Canon backed out of the global research race to support Lem financially.

When asked why one of his biggest competitors would back Spartan, he said: “There are still researchers who are working to create something similar. But at the heart of this, everyone wants to get this product to market.”

When Spartan set out to create its diagnostic device, researchers wanted to develop something that would appeal to customers beyond the medical community. The new target market helped the team develop their innovation strategy with a clear focus on the size, design and marketability of the product.

In February 2018, news headlines announced Spartan Bioscience had successfully developed an instant test for Legionella, the latest application for its DNA analyzer. The bacterium, transmitted through air droplets, is the cause of Legionnaires’ disease, a severe pneumonia that can be fatal.

The Legionella test is “the latest game for the Spartan Cube console,” says Lem.

Legionella is often present in large buildings— – offices, condominiums and hotels—which have cooling towers or water fountains. In 2012, exposure to these bacteria at a Quebec City public building killed 14 people and caused 167 others to become severely ill.

The federal government funded a 2017 study to test Spartan’s DNA analyzer against traditional Legionella detection methods, which were mostly available to scientists and technicians.

And the Spartan Cube proved worthy.

Researchers discovered that traditional sampling for Legionella, where scientists take a culture to a lab and put it in a petri dish for a two-week incubation period, had a 60% rate of producing a false negative.

“That means six out of 10 times, the petri dish test would come back saying there was no legionella evident in the sample, when, in fact, this harmful, potentially fatal bacterium was present,” says Lem. “In 10% of Legionnaires’ cases where people are hospitalized, they die.”

The Spartan Cube has a much higher accuracy rate and produces instant results. Testing over several months found that 39% of 51 federal buildings with adjacent cooling towers had enough Legionella present to trigger a significant change to maintenance schedules. Four of the cooling towers tested had levels of the bacteria 10 times the regulated limit.

“Based on that study, we’ve had very good user feedback,” says Lem.

Feedback is important to Lem as the team continually improves its product to respond to consumer demand.

Three of Canada’s dominant large building owners have already reached out to Spartan to commission use of the device.

Build an Export Plan Being Competitive

How innovation can help you gain a competitive edge

Why developing innovative capabilities can make you more competitive 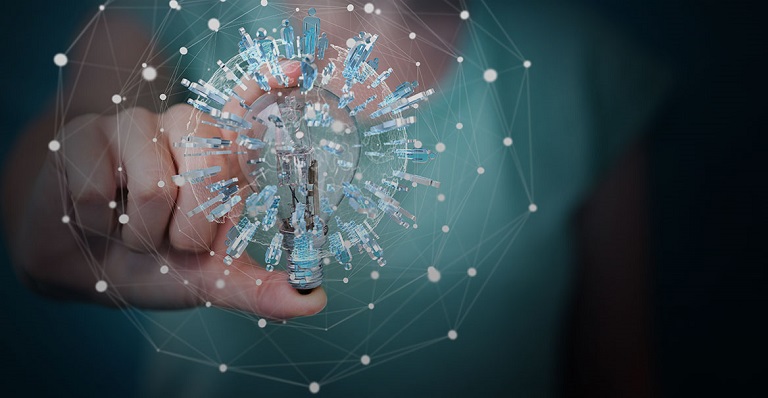 Help your company continually improve with ideas and innovation.