It’s not very often the words “extremely optimistic” are heard in relation to the socio-economic impacts of the pandemic. Yet, based on Canadians’ increased appetite for locally-produced, locally-sourced and Canadian-made products since March 2020, those very words are being used to describe the recovery and future growth of Canada’s food and beverage industry, both nationally and internationally.

While the $119-billion industry saw an overall 5.2% decline in mid-2020 within Canada, it’s recovered to pre-pandemic levels, according to our recent Business Development Bank of Canada’s (BDC) Food and Beverage Industry Outlook: How changes in the economy affect Canadian food and beverage manufacturers. And with cross-government support from the Business, Economic and Trade Recovery (BETR) team—formed in 2020 to foster greater collaboration and innovation, and comprised of Export Development Canada (EDC), BDC, Global Affairs Canada, the Trade Commissioner Service and Innovation, Science and Economic Development Canada—the industry’s potential growth is only getting stronger.

For companies involved in the food and beverage industry, our customers—mainly small- and medium-sized Canadian entrepreneurs—are extremely optimistic. Many of them are doing really well, they were able to switch gears, change their model and take advantage of consumer behaviour. Throughout the pandemic, I’ve helped companies pivot by advising them on the implementation of quality management systems, food safety programs and operational efficiencies. Despite the odds, the results of their reset helps paint a picture of the industry’s overall successful adjustment and expansion.

In fact, our report anticipates a robust 15.6% growth in the food and beverage sector domestically over the next five years. Such growth will impact exports, which currently account for 30% of manufacturing sales, predominantly to the United States.

It’s a good news story for Canadian agri-food producers, but it also signals a significant groundswell of behavioural change in how companies are doing business and how consumers are engaging with their products.

A key driver to the agri-food sector’s predicted growth comes from consumers reacting to supply chain disruptions mid-pandemic. When major grocery chain shelves were emptied and stores were unable to replenish imported value-added products, like pasta sauce, flavoured carbonated drinks and packaged frozen food, consumers voted with their wallets. Forced to eat at home during lockdown, Canadians helped trigger a 20% increase in year-over-year grocery store sales from November 2019 to November 2020, despite a 27% decline in manufacturing.

The supply chain disruption really got people thinking about what is made in Canada and how they could add it to their repertoire at home.

Many of our clients—particularly those with more artisanal offerings—have heard that customers are choosing to support local producers. They’d much rather buy local and have that quality. That was already a conscious trend, but the pandemic really brought it to the forefront of everyone’s minds.

One fad that illustrated the impact of supply chain disruption was the rise in homemade bread. The resulting shortage of flour produced by multinationals forced consumers to turn to small, local mills. The realization that some grocery store chains weren’t going to be a reliable source of basics also meant that consumers already choosing value-based eating—buying local, for example—also developed personal loyalties to local producers. In our report, we found that an estimated 21% of Canadians turned to local products during the pandemic and 74% say they want even more locally-produced food and beverages going forward.

That’s always been a niche, but the pandemic has decreed that it’s mainstream now. People want a relationship with their food suppliers. One of the tailwinds we’re seeing on the positive side is the move toward purposeful purchasing.

Along with supply chain hiccups, agri-food companies reliant on imports faced increased pressure as commodities prices rose 15% and are expected to continue to rise. Currently, 65% of food producers’ expenses derive from food products that, pre-pandemic, were already susceptible to natural disaster, climate change and trade issues.

For consumers, food inflation is expected to jump between 3% to 5% in 2021, with the biggest increases found in meat and vegetables, according to Canada’s Food Price Report, published by Dalhousie University and the University of Guelph. The report notes that food inflation has outstripped general inflation for 20 years, with the average household seeing 170% rise in costs.

In some respects, consumer demand in the pandemic has shaped those costs, says Alyssa Gerhardt, a Dalhousie University PhD student who worked on the report.

We’ve seen more demand for online services in both food retail and food service, an increase in Canadians gardening and preparing meals at home, and a renewed interest in local food supply chains.

While some costs are passed on to consumers, Canadian manufacturers are also rethinking their means of production and processes. In the past, the agri-food industry has lagged behind other sectors in adopting automated production and new technology, with just 49% of food processors investing in advanced technology by 2017. Together with post-pandemic labour shortages, inflation and COVID-19 health and safety protocols, the impetus to embrace automation is gaining force.

For the first time in a long time, producers are looking at ways to operate more leanly:

If they were reliant on one packer shipping to Canada, they’re now looking for a local facility or investing in their own. These changes are part of what’s driving the sector growth.

The bottom line is that as costs rise, manufacturers are learning to operate more efficiently and focus on unique brand marketing. Many producers are bringing their provenance to the forefront of their marketing efforts. Where locally-made was once considered less valuable than mass-produced, it’s now a major differentiator attracting major grocery chains as purchasers.

These companies are celebrating who they are—“I live on a B.C. island and I make this fleur de sel”—and where they were once quirky and artisanal, the grocery chains love the brand story. Consumers, too, are responding to that story and will research a brand to see what their ethics are.

Growth in the global marketplace

Between improved production operations, diversified suppliers and the “buy local” trend, Canadian agri-food producers riding the sector’s growth are also poised to add to the $56 billion in business Canada does internationally in agricultural and agri-food. Currently, Canada is the world’s fifth-largest exporter of such products after the U.S., the European Union, Brazil and China. In the past decade, Canadian agricultural and agri-food exports have grown by 103%, according to the Canadian Agri-Food Trade Alliance, a coalition of national organizations that support a more open international trading environment for agriculture and agri-food. 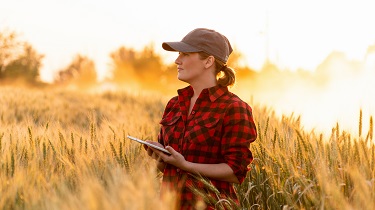 In addition to leveraging Canada’s stellar reputation for food safety, Canadian agri-food producers seeking expansion can take advantage of both BDC’s financing and advisory solutions, and EDC’s expertise in managing risk. In particular, EDC supports Canadian manufacturers in understanding financing solutions, including purchase order financing, credit insurance, international payment terms and loans, and can also help protect against foreign exchange risk through its Foreign Exchange Facility Guarantee. As a financially sustainable Crown corporation, BDC is committed to the long-term success of Canadian business owners and has been proudly serving entrepreneurs since 1944.

To take advantage of the agri-food industry’s trajectory into international markets, there are four key challenges, as well as opportunities, as outlined in our BDC report.

For many Canadian companies, the pandemic was and continues to be a watershed moment, which tested their agility in changing their products, services and even marketing to adjust to the new reality. Despite the many setbacks, it also proved the old trope is true: That for every challenge, there’s an opportunity to learn and grow.

Protect your profits from foreign exchange risk: Find the best FX hedging instruments for your business, keep your working capital liquid and maintain flexibility to grow.