In her new role as national lead for Export Development Canada’s Women in Trade strategy, Jennifer Cooke hopes to inspire women entrepreneurs to dream big, be daring and take on the world.

“I’m really inspired by female entrepreneurs and helping them export to grow their business—this job really is my passion. I love working for an organization that supports diversity and inclusion, and while I’m leading our women business strategy, I’m more like the conductor—we all play a part at EDC.”

Cooke originally joined Canada’s export credit agency eight years ago and has worked as a senior account manager and then a district manager on the frontlines with small and medium-sized businesses to help them succeed in international markets.

As EDC’s corporate lead of Women in Trade, Cooke’s job is now dedicated full time to helping women entrepreneurs export and make their mark in international markets. Working directly with women entrepreneurs and key partners, she and the team of EDC Champions for Women provide key introductions and connections, impart specialized trade knowledge, and facilitate access to financing and growth capital.

It’s exciting for me to be able to work for women entrepreneurs. I have two daughters and it gives me the opportunity to make the world a better place—and a more equal one—for the next generation.

Cooke’s face lights up when talking about her and her husband's 10- and 13-year-old daughters, whom she also wants to inspire. The family lives in Burlington, ON, although Cooke is frequently on the road for work. A graduate of the University of Western Ontario Ivey Business School, Cooke credits her trailblazing mother for inspiring her to become a leader.

“I come from a family of entrepreneurs and immigrants. My grandmother ran a business in Egypt—selling Coleman Stoves, of all things. When my grandparents were forced to leave Egypt for political reasons, they chose Canada as their new home, and the place for my mother and her brothers to have a better life. Coming to Canada was a dream for my mom who wanted to go to school and learn. Having grown up in an environment where girls didn’t always get to go to school, she studied hard, won numerous scholarships, and was accepted to medical school and became a physician. She was one of only seven girls out of a class of around 300 in those days.” Cooke says the entrepreneurial spirit flows through her blood and that she has been influenced greatly by the tenacity of her mother and grandmother.

“My mom always told me that anything was possible and that I could achieve anything. Through her example and her encouragement, she taught me to dream big and I did. When finishing university, I studied business and finance as I wanted to work on Wall Street.”

Cooke landed a job with Enron and spent several years living in Texas working in the male-dominated field of oil and gas financing.

“Growing up in multicultural Canada, you are used to living with every race and religion—I had a very diverse group of friends growing up and wanted to be friends with everyone. While I learned a lot about finance, at the end of the day, I knew that the energy field was not my passion. After six years, I came back to Canada and became an entrepreneur.”

“I learned firsthand about trying to scale and grow a business—it takes a lot of money and deep pockets to build a brand. If you don’t have access to capital, it can be difficult to grow. And getting products into new markets can be challenging—it’s hard to figure out who to partner with and how to enter other markets effectively.”

Cooke says her company focused on exporting to the U.S. and Mexico and broke even in their first year, but the realities of starting a young family added to all the challenges of growing the business internationally. When an opportunity eventually arose to work at EDC, she jumped at it.

Cooke credits her past work experience with giving her a greater understanding of the challenges and concerns women entrepreneurs face. She admits that there are misconceptions when it comes to exporting and that many business people assume exporting is only for larger companies that make and ship goods across the border.

“Based on what we know in Canada, women are starting businesses at a faster and faster rate, but they are still vastly underrepresented when it comes to ownership of Canadian companies and they are staying small. At EDC, we’re trying to learn more about why Canadian women aren’t exporting.”

According to statistics, Cooke says approximately 16% of businesses are majority-owned and led by women in Canada, and less than 2% of them are midsize or larger. One area where EDC can help women who want to grow and scale their companies is to provide easier access to resources and networks.

Women aren’t unwilling to take risk, but they want to understand and mitigate the risk before they go global. If they take on debt, they pay it off too quickly and don’t leverage that finance to fuel growth. This is where EDC—along with our partners—can help.

Cooke says part of her role will be to educate and explain EDC’s core products—increasing awareness about our financial and knowledge solutions and creating connections.

“The more we can profile women who are growing their businesses internationally, the more it will inspire others. EDC offers a wealth of specialized trade knowledge and partners with other like-minded organizations that support women entrepreneurs to help them find guidance and mentors to help them along the way. And we partner with all the Canadian financial institutions to ensure women can access the working capital they need to take on international opportunities.”

Cooke says exporting to the U.S. is often the first step for Canadian companies, thanks to our integrated economies and similar time zones, languages and business practices. But she cautioned that relying on only one market can increase risk, especially when there are many profitable markets around the world to which Canadian companies can export.

The Royal Bank of Canada estimated that increasing the number of women-owned businesses by 10% over the next decade would have a tremendous impact on the Canadian economy, boosting their economic contribution by a whopping $198 billion.

Cooke says she is thrilled by the recent appointment of Mairead Lavery, the first female president and chief executive officer in EDC’s 75-year history.

“Mairead is a former entrepreneur herself and understands firsthand the challenges facing women. She is the ultimate champion for women entrepreneurs and is an inspiration for dreaming big. She keenly supports the commitment our organization takes to gender diversity and inclusion and fully backs our strategy of supporting women in trade.”

“I would love it if we could inspire women and girls to dream big, be daring and take on the world,” Cooke says. 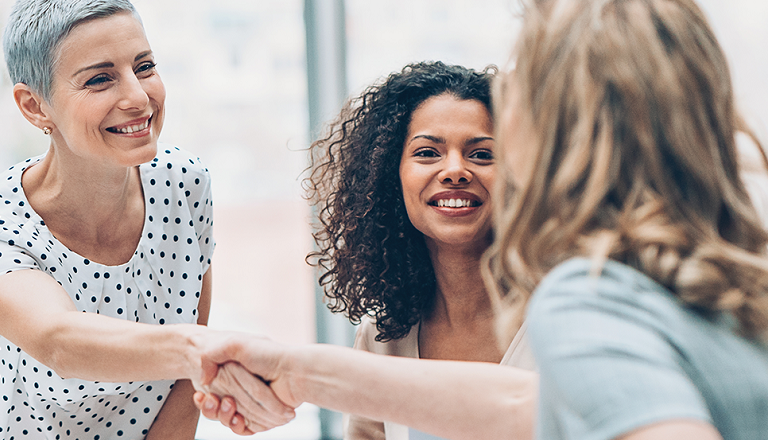 The Canadian government has numerous programs to help women-led businesses expand into global markets. This webinar shows you how.