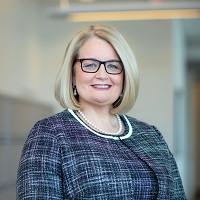 Remember when we thought we understood what “change” was?

Four months ago, before we could guess at the full impact of what we were confronting (back before the Coronavirus became “COVID-19”), we thought we knew what change looked like. It was a word we used a lot in business. We thought in terms of "anticipating trends" and "planning for long term growth." We’d say things like "change is the new normal" and “the only thing that’s constant … is change.” So, change was something that happened, but we had somehow taken the drama out of it.

And every executive or entrepreneur on the planet would tell you that "anticipating change," making sure their business was ready for it when it came, was a central focus of their role.

I think it’s safe to say this was not the kind of change anyone was ready for. I wasn’t; and I’m one of those leaders who takes pride in my ability to anticipate, plan for and adapt to change. I had spent the first year of my term as President and CEO making changes within our organization, trying to equip it to have a larger impact, make it more agile, more ready for the future.

And then the future happened.

I don’t have to catalogue the damage done by the COVID-19 pandemic in human and economic terms. At a June meeting of industry stakeholders I heard a wide spectrum of first-hand accounts. Everyone has felt the impact of this pandemic. There are some for whom the damage has been significant and the comeback will be a long and difficult struggle. For others, the crisis has been less onerous. Some sectors like agriculture, construction and mining, seem to have been less affected than others and, with adjustments, have been mostly able to carry on.

There are some other bright lights; examples of businesses that have found ways to respond to this unprecedented change, by changing. Mondetta Canada, of Winnipeg has transitioned from a designer and maker of activewear into a key distributor of essential medical scrubs. And Stanfield’s, an underwear manufacturer that’s older than Canada, has transformed into a maker of personal protective equipment. These companies, and others like them, have pivoted their operations in a time of crisis, for their own survival and for a need greater than their own; for the health and security of frontline workers and for us all. They should be applauded.

EDC has had to do some pivoting of its own. Literally overnight, our entire workforce, moved from its headquarters in Ottawa and other locations around the world, and has learned to work from home, physically distant, yet still effective. We have found new ways to deliver our programs and services, and, working with our partners in both the public and private sectors, we’ve begun delivering programs and services that didn’t exist three months ago.

This kind of adaptation – by Stanfield’s, Mondetta, or EDC – isn’t possible for every business out there. They will need other kinds of help, new ideas and creative thinking. And they will need support to get the capital and investment necessary to bring these ideas to life.

As I write this from my home, the news is beginning to show some signs of brightening. In many parts of the country the curve is not only flattening, but in decline. More businesses are opening - slowly and carefully, for sure, but opening nonetheless.  At the same time, we also see the impact of relaxing the conditions of lockdown too quickly; the small outbreaks in countries where “the curve” had previously disappeared.

While we monitor daily the number of cases worldwide – now just over 10 million – we are also looking toward recovery. But there’s no doubt that when the recovery happens, we will be operating in a different world. Some companies will have disappeared, some industries will be permanently altered. I don’t think anyone knows what that new world will look like.

What we do know is that we will all have to become much more accustomed to what disruptive change is, and the kind of flexibility and resilience it demands as a response. I can tell you what I told the industry representatives I met with early in June, that EDC counts itself lucky to be one of those organizations that is well placed to respond to the incredible changes happening around us.

And we feel privileged, and ready, to step up to help those companies that need it. That has always been the case with EDC. But now, in this time of extraordinary change, it has never seemed more important.

COVID-19: Relief for your business

We are committed to supporting you through this pandemic with expert knowledge and financial services.